For about 15 years, some of the most expensive and critically beloved wines in Santa Barbara County were made inside of cramped warehouses on the outskirts of Buellton. A chip shot away from the buzzing freeway, these nondescript, nearly windowless buildings were home to Jonata and The Hilt, some bottlings of which commanded $100-plus prices upon release.

It was far from a bucolic wine country spread, and rather modest, given that the proprietor is billionaire Stanley Kroenke, who also owns the cult Napa winery Screaming Eagle as well as the Los Angeles Rams, Denver Nuggets, Colorado Avalanche, and Arsenal teams, among others. The original estate vineyard nearby in Ballard Canyon is perfectly pretty, but building a visitor-serving winery there wasn’t really in the political cards.

So in 2014, the winery — under the direction of longtime winemaker Matt Dees — purchased Rancho Salsipuedes on the extreme southwestern edge of the Sta. Rita Hills, just outside of Lompoc. The ranch’s increasingly celebrated Radian, Bentrock, and Puerta del Mar vineyards would support the pinot noir and chardonnay focus of The Hilt, which Dees started in 2008 as a Burgundian brother to pair with the Rhône and Bordeaux grapes of Jonata. But the 3,600-acre Salsipuedes also included space for an estate winery and hospitality complex.

By the harvest of 2019, Dees and his right-hand man, Drew Pickering, were happily out of the Buellton warehouses and making wine in a large, modern facility that they helped design, nothing short of a winemaker’s dream.

“This place has changed our wines completely,” explained Dees earlier this year over some recent vintages. “I used to think that 98 percent of terroir was the vineyard, and 2 percent was human. Then it became 55 percent human and 45 percent vineyard. But now I think that the facility is a critical part of that formula too. It makes a big difference.”

We were tasting inside of the winery’s latest unveiling: a brand-new, Howard Backen–designed hospitality center in an upscale barn setting next to the winery, where visitors can enjoy flights in the comfort of farmhouse chic decor while overlooking the extremely chalky cliffs on this windswept corner of the Sta. Rita Hills. Opened last August, “The Barn at The Hilt Estate,” as it’s officially known, serves both Jonata and The Hilt wines in flights that range from $50 to $85 in price.

“We are vintage-happy here — we constantly change what we’re pouring,” said the center’s manager Christine Doran, who plans to use the on-site commercial kitchen and the rest of the property as time goes on. “We have every intention of not only developing a food program but a tasting that walks through the vineyard.”

The Barn is really the only way to see how Dees and Pickering are moving The Hilt in new directions. Instead of focusing on style-driven bottlings of the past, such as Vanguard and Old Guard, they are showcasing single vineyards on the labels now, namely Radian and Bentrock, though they do still use some old-vine Sanford & Benedict in blends.

They’ve learned a lot about Radian, which is shaped like a huge, steep ski-mountain bowl, and Bentrock, which cruises across the lower benches on more graceful slopes. “Preconceived notions are full of shit,” said Dees, referring to the old notion that Bentrock was best for chardonnay and Radian was made for pinot. Bentrock pinot is quite good, it turns out, and Radian chardonnay is downright great, as evidenced by a very crisp vintage in our glass. “It’s just an icy place,” said Dees, “and the wine tends to be icy.”

Protected from the wind a bit more, Bentrock shows a broader style, at least initially. “Bentrock tightens up at the end of the sip,” opined Pickering. “Radian starts tight up and then opens up.”

Though most consumers still fawn over pinot, Dees remains as bullish as any winemaker in the region on how distinctive chardonnay can be from the Sta. Rita Hills — even better than Burgundy, he acknowledges with an invisible wink. “Salsipuedes was really a pinot vineyard when we bought it,” said Dees, who’s increased chardonnay from about 5 percent to more than 15 percent of vineyards today. “I don’t know if there will ever be parity, but it really should be much closer.”

We then tasted some of the pinots — Bentrock being a bit softer, the estate blend right down the middle, and the Radian quite dark and full of familiar black cherry. Then we got into the Jonata, including the merlot-based Fenix, syrah-meets-cabernet sauvignon Todos, Sangre syrah, and the cab-based Desafio, of which we tried the 2015 vintage to see how well the wine ages.

“The beauty of Jonata wines is that they are so layered that they require checking in all the time,” said Dees. Now that The Barn exists, everyone can do just that.

Support the Santa Barbara Independent through a long-term or a single contribution.

June 13, 2022
What the artistic officer of NYC’s Lincoln Center does in a workday

You may have missed

What expanded public subsidies could mean for children, families, and teachers

What expanded public subsidies could mean for children, families, and teachers

How Ikea tricks you into buying more stuff

June 16, 2022
McCollough appointed to Al. Board for Registration of Architects –

McCollough appointed to Al. Board for Registration of Architects – 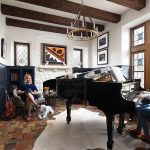 A Look at an Ann Arbor Family’s Music Room